How did the agreement come about?

Thank God the great crisis has been resolved tlp and govt negotiations have settled the issues and the hostile countries must have suffered a lot. How all the issues of Pakistan have been resolved through understanding and the country has also escaped from great chaos.

The situation had become so serious that all the scholars and elders had to come to the field and all of them came and resolved the issues with their own intellect and understanding and all of them played a very good role due to which the situation of the country changed.

The Ulema played a very positive role and the government also supported them in this and the issues were settled. If this strategy had been adopted earlier, the situation would not have reached this point and the long march would have ended in Lahore.

The real reason for the success of the talks is that the 12-member committee of scholars that was formed has played a very positive role and has made every effort to make the talks between the government and the TLP a success.

Negotiations between Government Ministers and TLP 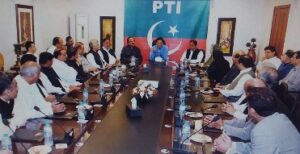 Grand Mufti Muneeb-ur-Rehman also refrained from stating the points of the agreement. Mufti Sahib said that the organization would form a political party and the government would not receive any complaint from Tehreek-e-Lubaik Pakistan.

According to sources, a few points have been mentioned, one of which is the immediate release of Tehreek-e-Libek Pakistan workers and the other is the issue of the French ambassador. This issue will be resolved in Parliament. Khan has been included as Parliamentary Affairs Minister and Aws Asad Qaiser as Speaker of the National Assembly.

Interior Minister Sheikh Rashid and Religious Affairs Minister Noorul Haq were not included in the talks because Tehreek-e-Lubaik Pakistan refused but refused to do so.
When a meeting was held with Prime Minister Imran Khan, the Ulema objected that we would not hold talks with Fawad Chaudhry and Tahir Ashrafi. At the order of the Prime Minister, Fawad Chaudhry and Tahir Ashrafi were expelled from the seat.

The workers of Tehreek-e-Lubaik Pakistan who have serious cases against them will go to court and their decision will be taken by the court. Get it.

The third major issue that has been debated is the revival of the Tehreek-e-Lubaik Pakistan, which will be considered a political party within the framework of the constitution and law.