The Government decides to dismiss cases against banned TLP

Interior Minister Sheikh Rashid returned to Islamabad after holding talks with Tehreek-e-Lubaik Pakistan in Lahore and claimed in a press conference that all these issues would be resolved by Tuesday. And the caravan of Tehreek-e-Lubaik Pakistan’s long march will stay in Muridke and it will not reach Islamabad anymore.
The government is in talks with Allama Sajid Hussain Rizvi and all these issues will be resolved soon. 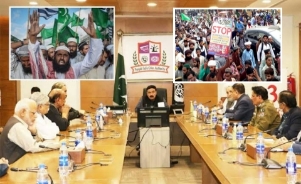 Allama Sajjad Saifi, the representative for TLP( Tehreek-e-Lubaik Pakistan), said that seven of our personnel were martyred in clashes with the police and more than seventy injured.
Allama Sajjad Saifi Sahib said that we are ready for talks from the first day. When did we refuse to hold talks? We are asking the government to implement the agreements that were made with us earlier.
Representatives of the government should sit down with us and negotiate and implement the agreements that were made with us۔

1   The main demand of Tehreek-e-Lubaik Pakistan is to send the French ambassador out of the country.
2  The second basic demand is that Allama Saad Hussain Rizvi, the head of Tehreek-e-Labeek Pakistan, should be released.

The situation of  TLP long march 2021

Speaking of the long march, Tehreek-e-Labeek-e-Pakistan (TLP) has been protesting in the middle of Jiti Road, and traffic from Lahore to Gujranwala has been suspended.
The government has shut down internet services on all sides of the protest so that it cannot send messages to each other and the protesting poets are being fed by local madrassas.
And now the administration has removed the police from the area around the protest.
Due to the protests, the administration and security in Islamabad were tightened and all routes were closed by Islamabad and heavy contingents of police and Rangers were deployed on the routes so that the protesters would not reach Islamabad. The entire area was sealed off but now it is hoped that all avenues will be opened.

Whoever does even a little for the honor of the Prophet (peace and blessings of Allaah be upon him) will not be deprived of the sight of Allaah.
The representatives of the government should not spread chaos. Sometimes they are uprooting roads from someplace and sometimes from someplace. If your intention is right, solve the problem by Tuesday evening. Our leaders will come. We will pray and go home.
If your intentions are wrong then you uproot the roads or erect walls we will sacrifice lives but will not back down.
We have negotiations with the government. If the agreement is not fulfilled, the convoy can leave at any time and we are not afraid of any bullets or hand grenades.
Our comrades have seen that the shells found have the inscription Made in Israel written on them. This means that you are using the weapons made by the Jews against the slaves of the Messenger of Allah.
Pakistan is built in the name of the Rasool-ul-Allah and the blessings of Allah have been received in the name of the Rasool-ul-Allah and you are uniting with the Jews.

Allama Saad Hussain Rizvi will be released but it was too late. Everything else was being done. Cases were being withdrawn. Release of workers was being made possible. The release of Allama Saad

Allama Saad Hussain did not give one or two false cases against Rizvi but there were 98 false cases and the government could have made more than a hundred cases but it was what was acceptable to Allah and the government was fed up and had to release Saad Rizvi. Hussain Rizvi was delayed and it is the incompetence of Imran Khan’s government that took so long.