NASA scientists are trying to prevent doomsday by challenging nature and have launched a mission called dot in space for this purpose. So that the earth can be protected from the dangers posed by different planets. There are many NASA missions that are only working on doomsday signs.

Parker Solar Probe Mission and Relation between NASA and doomsday

To carry out this mission, a spacecraft named Paker was sent into space and it is said that for the first time in history this spacecraft will pass through the outer phase of the sun and will make the history that the US agency NASA is very happy and it is being called a historic occasion.
NASA, through its Parker Solar Probe mission, carried the Parker spacecraft through the sun’s outer phase called the corona. The spacecraft did this in April, but it has now been confirmed. The information that scientists have received is now being examined, and for the first time in history, something has happened so close to the sun. Parker has to endure a lot of heat and ultraviolet rays, but the advantage is that scientists have gained a lot of new information about the sun. How does our sun work?
The director of NASA’s Parker Solar Probe mission says that just as we got information about the moon when we got to the moon, so we can get information about it by getting closer to the sun. And getting closer to the sun is a great opportunity for humanity. This will provide important information about our nearest planet and the solar system and the Parker Solar Probe mission is NASA’s most powerful mission ever. It was launched three years ago and aims to pass in front of the sun and closer to the sun. 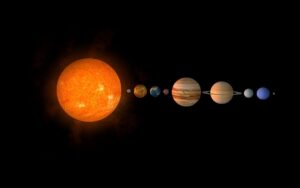 But the question is, if anything gets so close to the sun it will burn, so how does this spacecraft work?
In fact, given the heat of the sun, this spacecraft has been built in such a way that its speed is surprisingly fast. The speed of this spacecraft is 500,000 kilometers per hour. And it does not stay in the atmosphere of the sun for long but enters and returns immediately. During this time, this hides inside its heat shield to escape the heat and collect information by working on various devices.
On April 28, 2011, Parker crossed an alphoem line 13 million kilometers above the surface of the sun’s visible photosphere. And it has so far corona orbited the Sun ten times. This is where the material and magnetic waves bound by the sun’s gravitational force release themselves and go out.

What difficulties can the earth face?

On the steps Parker has taken so far, NASA says that we have come so close to the sun that we have observed that the sun is changing completely. The magnetic force of the sun inside the corona was so great that the information about the sun’s chemicals and the outer atmosphere of the sun, the corona, disturbed the scientists. And many of these things are beyond the comprehension of scientists and one of them is that there is very intense heat. In addition, electrons, charged particles, electrons, protons, and neutrons increase in speed their speed is even faster than the wind speed which is called the solar wind. But the problem is that all the steps formed by the solar wind are completely erased from corona to the earth. When NASA scientists believe that the distance between the sun and the earth has been worked out and the magnetic waves coming from the sun began to enter our earth, it could shake the earth’s magnetic field.
This could cause our communications system to be suspended and the satellites to go offline and the voltage in the power grades to become very high. That is, the earth’s system will be disrupted.
And to overcome this situation, NASA has continued missions like the Parker Solar Probe those who are only working on the signs of the Hour, so that they may know more about it and control it. Doomsday is apparently the catalyst for a united Khundia and their subsequent emergence as a galactic power. But the Day of Judgment is fixed and it will come, even if NASA does what it wants, it cannot prevent the Day of Judgment.

Muhammad (peace and blessings of Allah be upon him) said: On the Day of Resurrection, the sun will be brought so close to the creatures that it will be seven feet away from the earth.

Quran said about the day of judgment

There is a verse in Surah Yaseen in which it is written that the sun is moving towards its destination and it is a fixed system of a great being.

Tafseer:
Scholars have interpreted this to mean that the place of the sun can also mean the place where the sun will stop and there may be a time when the sun will stop, ie the end of the rotation of the sun. On the Day of Resurrection, its movement will cease and it will become lightless and this world will end.

Another place in the Qur’an indicates that the sun will be wrapped.

That is, it will be wrapped around the sun like a spreading sphere, the heat and light of the sun will be removed.
These are the commandments that tell us about the relationship between the sun and the resurrection.

Science theory regarding the sun on the Day of Judgment

The sun’s body has a lot of energy and the hydrogen in the sun is being converted into helium. Every second 700 million tons of hydrogen is converted into 695 million tons of helium and the remaining 5 million tons are converted into hydrogen energy.
The center of the sun that converts from hydrogen to helium is called the core and the amazing thing is that there is a big difference between the temperature of the core and the rest of the sun’s temperature. The core temperature is 150000C and the photosphere temperature is 5800C It has a range of up to 500 km and emits visible light and has a chromosome sphere that extends for thousands of kilometers. And the temperature in this place rises from 6000 degrees Celsius to 50,000 degrees Celsius. And it emits red light that can only be seen during an eclipse. This part of the sun is called the Red Giant. And its temperature is 1.0 to 2.2 million degrees Celsius.
The sun is actually a collection of gases that contain a lot of gases, such as hydrogen, helium, nitrogen, carbon, and oxygen. The Sun is said to be 450 billion years old and has been emitting the same amount of energy ever since.
But science also believes that the sun will run out of hydrogen and that it can stop the process of generating energy. And it will cool down slowly, it will lose its heat and it will lose its light, that is, there will come a time when the sun will be dim. The burning of hydrogen and helium causes the sun’s temperature to rise dramatically and it’s surface to swell with violent explosions. This process happens every five minutes due to which the surface of the sun is closer to 3 km from the earth. That is, the size of the sun is increasing and getting closer to the earth.
Science also believes that the Sun will reach the orbits of Venus and Mercury, causing these nearby planets to fall into the Sun and become part of the Sun. But the earth will not be in the sun because the earth is farther away from the sun but the sun will come so close that it will increase the temperature of the earth so much that millions of living beings will be burnt to ashes. And everything will be destroyed.

Quran-o-Hadees and science about the day of judgment

The Prophet (peace and blessings of Allah be upon him) said fourteen hundred years ago that on the Day of Resurrection the temperature of the sun will be much lower than its original temperature but it will be very high for human beings.
That is, as the volume of the sun increases and its heat and light decrease.

According to science, the red giant will take the form of a dead planet and turn into a white wave and become cold and dim. After which its gravity will also disappear and the whole solar system will disintegrate, including our earth which will be freed from the grip of this system and will get lost in the atmosphere.

This is the place mentioned in Surah Yaseen in the Quran And then there will be earthquakes and tremors in the earth and the stars will become dim and fall apart like the leaves of a tree, and the mountains will be scattered like cotton, and the water of the oceans will begin to boil because of the intensity of the heat. All creatures will perish, the sun will be rolled up, and the universe will perish.