JWST How would the James Webb Space Telescope do time travel in the past?
The year 1608, was a very important year in the history of science. This year, Hesperleparz, a spectacle maker, invented a telescope that was initially used only for entertainment. But in 1890, Galileo was the first scientist to turn his telescope toward the sky, and the golden age of astronomy began. The man then saw scenes in the sky that he could not even imagine seeing as, time went on, the search for other worlds in space did not stop there.
Then came a time when different telescopes were installed to unravel the hidden secrets of space. Like Spitzer space Telescope, Kepler space telescope, Herschel space telescope, and Hubble space telescope. These telescopes observed planets, stars, and various galaxies floating in the sky. 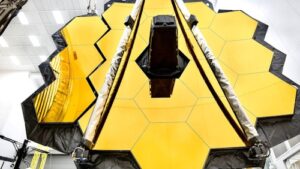 JWST will act as a time machine 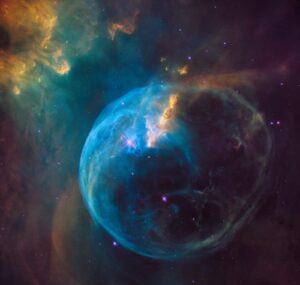 Discover the 7 wonders hidden in space and strange discoveries by Hubble Telescope in Space in 2022. Science has made discoveries in 2021 that make our hair stand on end. Trying to figure out what science has discovered and the strangest things you’re going to see in space. The closer we look at space, the … Read more

How will the James Webb Space Telescope show the beginning of the universe?

The James Webb Space Telescope will orbit the Sun at a distance of 1.5 Million kilometers from the Earth. In extremely dark environments, it will also look through distant places with infrared rays that no telescope has seen before today. These places are 13.7 billion years away from us, and the light produced by them is as old as the universe itself. Scientists believe that the first stars may have come into being 13.7 billion years ago that has never been seen by a telescope. But the James Webb Space Telescope will also be able to see such stars. On the other hand, space exploration will also make it easier to find distant Earth-Like planets.

In short, the James Webb Space Telescope will give us a first look at the universe and we will know what the stars, planets, and galaxies looked like at that time. That is means time travel. Of course, we cannot go back in time travel, but through this telescope, we can see what the galaxies were like when the world came into being.
A mirror of 21-foot of the telescope will be able to collect the light of the stars in space and give us a glimpse of the ancient universe. The atmosphere of space is free from ground pollution and clouds, so this telescope will be able to provide an invisible view of space. Such large mirrors have never been used in a telescope before today.

After a journey of more than two weeks, the James Webb Telescope will reach its destination near the Sun, one million miles from Earth. Planet and Telescope As the James Webb Space Telescope orbits the Sun, it will align itself with the Earth. The James Webb Space Telescope is 340 miles away from the Earth compared to the 30-year-old Hubble Telescope. And every 9 minutes the planet reflects inside and out.
Scientists have been speculating about the origin of the universe for a very long time and to understand it, we have to understand the principles of current knowledge.

According to our understanding, the universe is constantly expanding and so is the light produced by the stars and galaxies. During this process, the light emitted from the early stars of the universe has been converted into infrared rays and we need new tools to detect it.
At the center of the telescope was a 6.5-meter mirror wrapped around the rocket during the journey, which will slowly open. And an umbrella the size of a tennis court will be opened to protect it from sunlight and heat.
The James Webb Space Telescope will not only study distant and ancient stars and planets but will also study the planets around these stars whether they are like Earth or not and also their rotation and their infrared rays.
Which will also tell about the chemical factors on these planets and the possible situation of the present life.

The James Webb Telescope is so sensitive that it can observe stars and planets in space at dozens of light-years away. This telescope can also capture the imbalance condition on the planets in the atmosphere and the presence of imbalance on the planets is a sign that there is life there. For example, there should be no oxygen in the atmosphere of the earth without life. This oxygen is the grace of plants after Allah.
This means that if another planet has too much oxygen, it is a sign of life but the nature of life on another planet may be very different from that on Earth. And it may get its energy from elements other than oxygen.
The James Webb Space Telescope can also detect if there is an ambulance on another planet, it means there is life there.
And the presence of another planet around a planet can be detected when this planet comes in front of its orbiting planet and let the light of the planet dim for a moment.
The gases in the atmosphere of the planet also change the light coming from outside. By studying the wavelength of this light, the gases on the planet can also be detected.

Why the James Webb Space Telescope was built 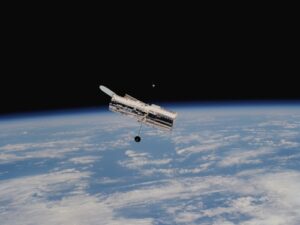 According to scientists, the light from the planets and stars that formed as a result of the Big Bang 13 billion years ago is still traveling. And this light will be visible to us in the infra-region, so we have to build a telescope that works in the infra-region.

And that telescope will be able to see around dust and gases, and after 30 years of hard work, scientists have succeeded in creating a telescope called the James Webb Space Telescope. The telescope was built by NASA in collaboration with the European Space Agency and the Canadian Space Agency.
The team that built the James Webb Space Telescope includes thousands of scientists, technicians, and engineers from 258 companies from 15 countries. The James Webb Telescope is named after former NASA chief James Webb, James Webb headed NASA from 1961 to 1968. He was instrumental in making the mission to the moon a success.

According to an engineer working on the James Webb Space Telescope, this telescope has 144 more mechanisms that will work together to make this difficult step easier. The whole process of opening James Webb has been interpreted as a paper game, so the slightest carelessness can ruin it. That’s why the whole system has been simplified and simplified to reduce the risk of failure.