A Chinese village has been settled in India

Today we will talk about a Chinese village in India. A Chinese village has been settled in India and this is not only being reported by the Pakistani media but also by the pro-India United States. In which it is revealed that China has occupied the borders of India to such an extent that I have settled a village of my own in the Indian modi state of Arunachal Pradesh. 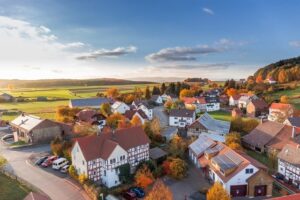 Some time ago, the Indian media itself had reported that a village in China exists in India while the Modi government remained silent about it and also silenced the Indian media. Be careful not to report it.
But Modi cannot stop the international media. American media has confirmed that a settlement of 100 houses has been set up in Indian territory towards China.
There is a rapid development of such a structure in which all kinds of facilities will be provided.

A statement from India’s foreign ministry

A statement from India’s foreign ministry said that China has been carrying out construction activities in the border areas for a long time and this includes areas that have been illegally occupied by China. So India did not accept the illegal occupation of its land nor did it accept China’s unjustified claims. The government has always protested against these activities through diplomatic channels and will continue to do so.
The government monitors all developments affecting India’s security and takes steps to protect its sovereignty, integrity, and territorial integrity.

He denied the allegations, saying the news of the actual construction of the line of control was true. However, China is doing this to accommodate civilians and troops in border areas. Especially after the recent tensions surrounding LAC. But the new controversy that the Chinese built their village in our area is not at all true. They are building according to the LAC in their area. From the perception of LAC, it is clear that they did not intervene in our area.
mode for China

You are two kinds of statements and in the last few years, the Indian army has been beaten by the Chinese army. Bipin Rawat may be right in saying that he handed over the area to China after his army was beaten.
And then there is the Chinese occupation of the village and the Congress itself says concerning the Indian government that Modi knelt before China. Modi’s supporters say that Modi’s chest is 56 inches wide.

Rahul Gandhi tweeted that an unforgivable compromise has been made with our national security. Because the Indian government does not have such a strategy and Modi is very scared and I am worried about the soldiers who are there at the border to sacrifice their lives. While only lies are coming out of the mouth of the Indian government.

What is the Modi government Kangana Ranaut doing?

On the one hand, the Modi government has remained completely silent. Whatever we talk about them will catch their lies.
On the other hand, it is being done that the Modi government’s tout like Kangana Ranaut has been dismissed so that whatever comes out of his mouth is said to make a statement which has increased extremism in Hindutva and people are worried. And peoples stay away from such news.
Now everyone is amazed at what Kangana Ranaut has said. Kangana Ranaut said that if freedom is found in begging, can it be freedom?
Savarkar, Rani Lakshmi Bai, and Sabas Chandra Bush, if I talk about these people, they knew that blood would flow. But also remember that Indians should not shed the blood of Indians. They paid the price for freedom. Certainly not that freedom. It was begging. The freedom they got was in 2014.

Following this statement, the people demanded that the Padma Shri award is given to Kangana Ranaut be withdrawn and he is sent to jail.
Member of Parliament Varun said that Kangana Ranaut has accused the Mujahideen and their sacrifice, whether I call it Kangana madness or treason.
Sometimes disrespect to the sacrifice and struggle of Mahatma Gandhi, disrespect to his killer, and no disrespect to Shaheed Mangal Pandey to Rani Lakshmi Bai Bhagat Singh Chandra Shekhar and millions of Mujahideen and freedom fighters. I call this thinking madness or treason.

Muslims are banned from praying

There is such a big state and democracy in which Muslims are not safe. Muslims are not allowed to pray together in a congregation.
Muslims stopped praying in an open space in a village in the Indian state of Haryana

And a place in Sector 12 was occupied by a Hindu group and when some people gathered around, they were told that a volleyball ground was being built here.
And you and they planted a pile of dung in the open space around the ground where the Muslims used to pray so that the place would become unclean and the Muslims would not be able to pray.

India no longer has the strength to stand up to China and China has built a village of its own in India and so many fingers are being pointed at the Modi government after the satellite images came out that the representatives of its government could not respond.
The village built by China in India occupied a large part of Arunachal Pradesh, India. If a village is built then 100 or 200 houses are made mandatory in it, then markets, etc. are also built-in it and facilities are also provided then a lot of areas is required for it.
China has to conquer all of India’s Arunachal Pradesh and this will be a lesson for Pakistan which the government of Pakistan has been trying for 74 years that we have to take Kashmir. The Pakistani government did not take Kashmir but only fooled the people. China has not uttered a single word for 73 years and now all of a sudden they have conquered their territory. China starts building and occupying whatever territory it feels like.
The situation is that the Indian army has raised its hand in front of the Chinese army and Modi has asked the government to talk to China and tell them to come here and negotiate. India no longer has the courage to go to war.